On Wednesday 23rd February - Shropshire Day, we celebrate everything we love most about stunning Shropshire. Home to rolling hills and historic towns, and birthplace to three icons of British history - Charles Darwin, the Industrial Revolution and, of course, the sweet pea. Unsurprisingly, it was the latter that we selected to bring the 'scent story' of Shropshire to life...

Inspired by vibrant flower festivals in the birthplace of the Sweet Pea, our Shropshire products are beautifully scented with Sweet Pea - a soft and sweet floral accord with notes of sweet pea, rose and hyacinth warmed by a hint of exotic jasmine and supported by a base of precious warm woods and vanilla.

There's no better time than on Shropshire Day to take a deep dive into the story behind the heady fragranced flowers, and the man who brought them to life... 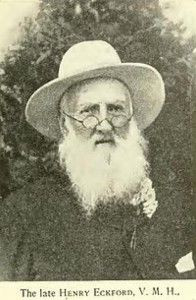 Henry Eckford was a Scottish horticulturist, and reputedly the most famous breeder of sweet peas in the world.

Born near Midlothian, on 17 May 1823, Henry was the seventh of eight children of James Eckford, a well-to-do farmer, and his wife, Isabel.

From the age of just fifteen Henry was sent north, to be apprenticed as a gardener at Beaufort Castle. From here he went on to work on the gardens of many prestigious Scottish castles and houses.

At just 24, and with already 10 years of experience under his belt, Henry moved to London, where he married Charlotte, going on to father four sons and two daughters.

In 1878 Eckford was invited to work in the gardens of an asylum at Sandywell Park in Gloucestershire, run by the physician William Henry Octavius Sankey. Sankey was a keen amateur hybridist himself and together they raised seedlings of florist's flowers at Sandywell and then, from 1882, at Boreatton Park, Shropshire, where Sankey moved his asylum. 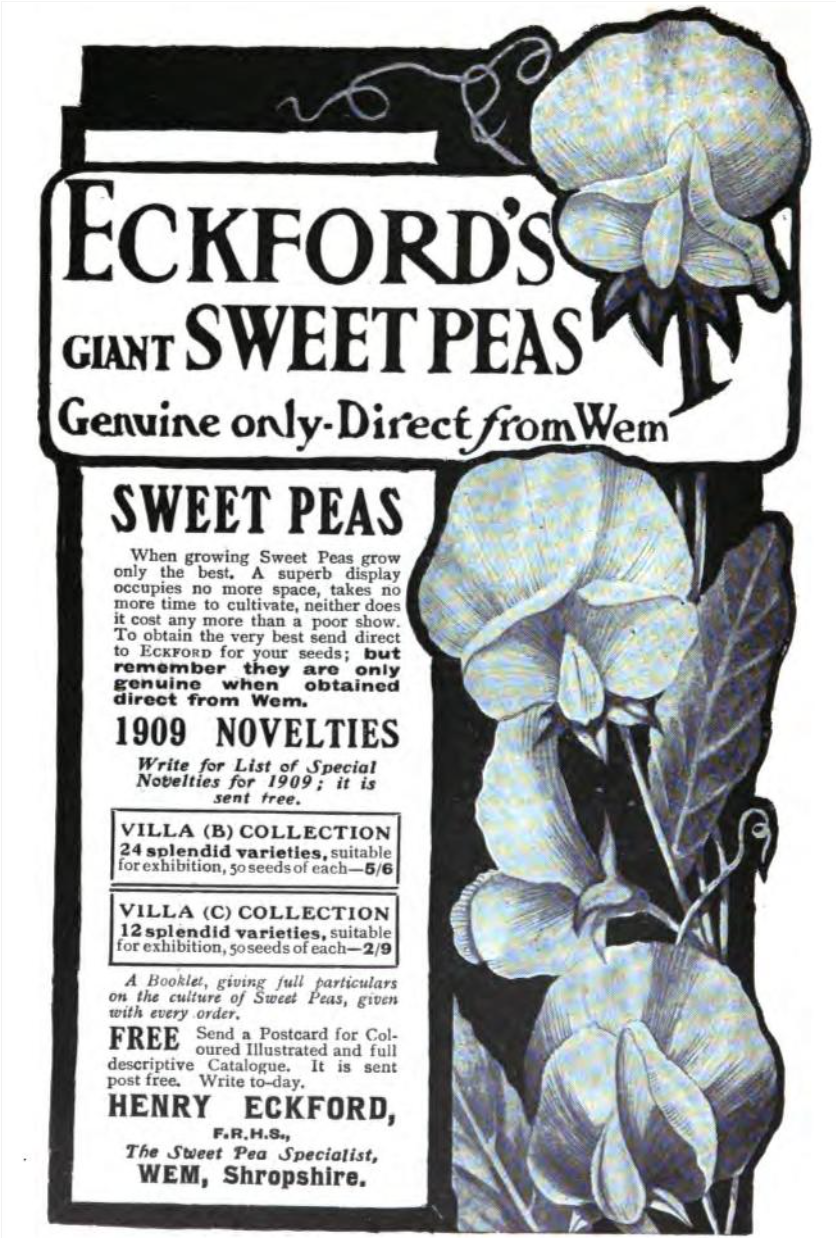 Birthplace of the Sweet Pea

Now living in Shropshire, the sweet pea experiments for which Eckford became famous started in 1879 when he gathered the best varieties of both edible and ornamental sweet peas and set out to raise new varieties of both.

Eckford was looking to create a new cut flower to compete with the ever-popular verbena. The original scented sweet pea was a simple hooded flower in purples and reds with white - it had hardly changed at all since its introduction from Sicily in 1699. By careful cross-fertilization and selection, Eckford developed new sweet pea varieties with multiple flower heads, longer stalks, a heady fragrance, and a range of colours, that were able to flower for seven months of the year. He was particularly associated with large-flowered varieties, termed ‘grandifloras’. 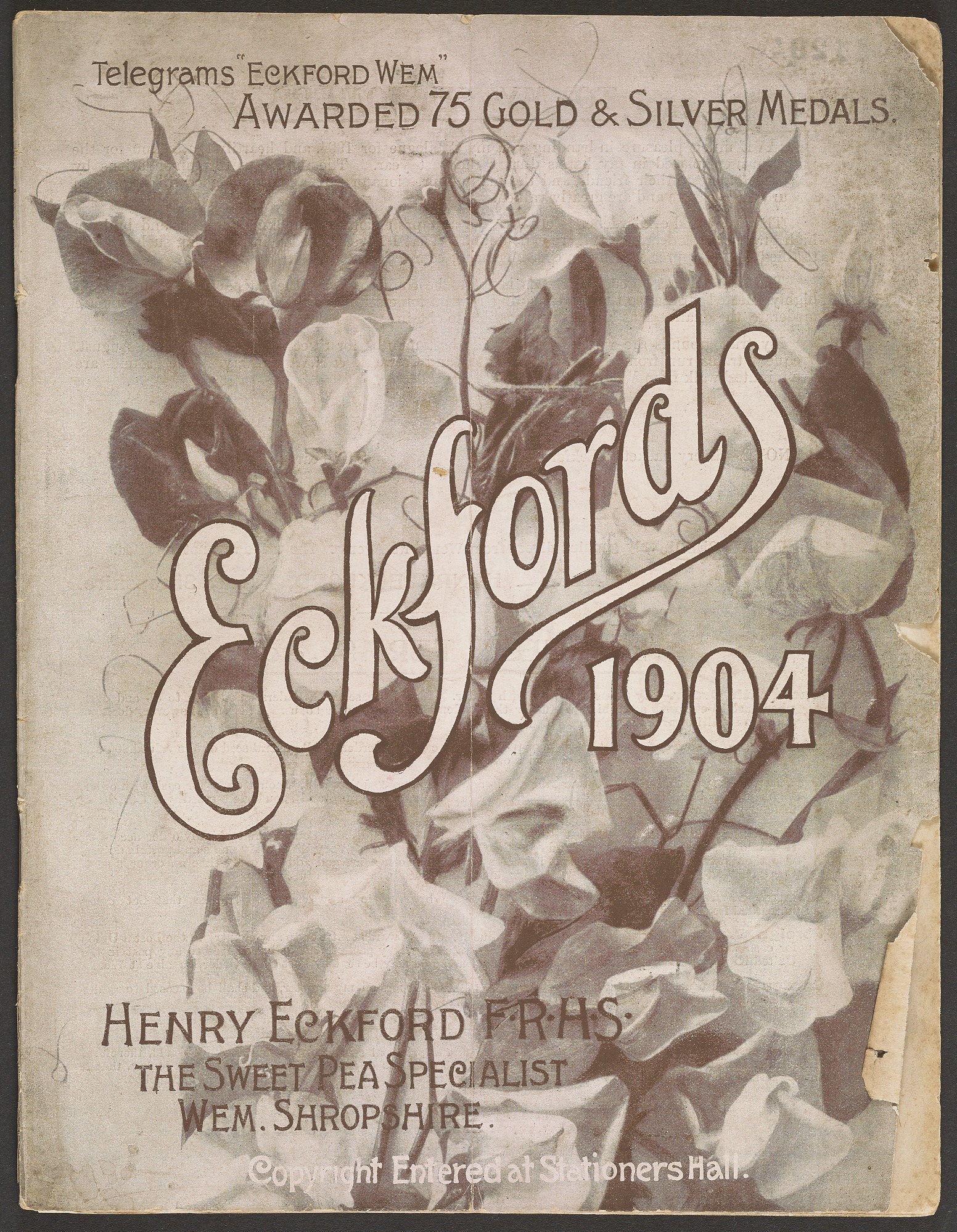 In 1888, aged sixty-five, Eckford finally set up his own nursery on land he leased at Wem, in rolling countryside reminiscent of his childhood home in southern Scotland.

He described it as "a place quite out of the way, where people would leave me alone, and where I could grow my peas".

His business prospered and demand grew to the extent that varieties were being sent as far afield as California. A craze for sweet peas in America made Eckford's name across the pond, while in Britain sweet peas became the most popular flower of the late Victorian and Edwardian eras.

Regarded as the father of the sweet pea, "he found the Sweet Pea little known and as little valued, and transformed it into that glorious annual which is now found in almost every British garden", an expert breeder wrote of his achievement.

Sporting a profuse white beard, his recognisable figure could be seen bicycling around Wem into his eighties. Eckford died at 31 Noble Street, Wem, Shropshire, on 5 December 1905, and was buried in the New Street cemetery in Wem. 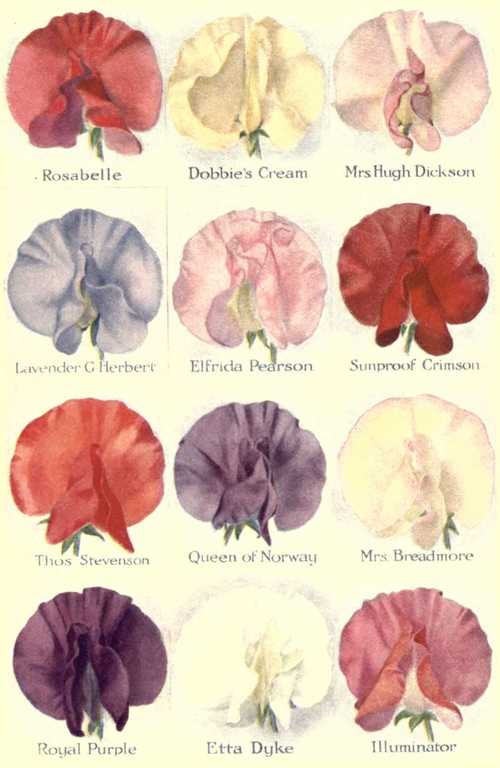 For 30 years Eckford's works were celebrated with an annual sweet pea festival held in Wem, hosted by Wem's very own Sweet Pea Society.

Founder member Val Goode set up the show with her late husband, John. Both keen gardeners, she said her husband had the idea for the show after noticing a street name in the town, Eckford.

"He realised that Henry Eckford was very important to Wem and to the modern sweet pea. Then he thought it would be good to put Wem on the map by having a sweet pea show," she said.

Unfortunately the last sweet pea festival in its current format ran in 2019, with organisers stating that "it has been a sad and difficult decision to make but the volunteers are all ageing and despite requests, no new younger volunteers have come forward."

That being said, we're pleased to see some smaller events have been popping up in recent years, continuing to celebrate Henry Eckfords amazing work, and keep the story of the sweet pea very much alive in Shropshire, and beyond.

Inspired by vibrant flower festivals in the birthplace of the Sweet Pea, our Shropshire products are beautifully scented with Sweet Pea - a soft and sweet floral accord with notes of sweet pea, rose and hyacinth warmed by a hint of exotic jasmine and supported by a base of precious warm woods and vanilla.

With 25 scents inspired by Britain's most beautiful places, what is the story behind your home county?

Fill your home with the scents of your home county for 3-4 months, with eco-friendly refills available.

3 wooden wicks for triple the crackle, and triple the ambience, helping to make your home your sanctuary.